Locked out of my HTC ONE after full device encryption!

I bought a new HTC ONE yesterday, and, boy, is it lovely! The speakers and the screen are simply gorgeous and the camera massively out-performs my old Galaxy SII's. I sincerely hope that HTC can capitalise on the ONE and get share back from Samsung - it's far more interesting when there is tough competition.


I have to admit my particular OCB: I'm paranoid on data and security. I back up my data regularly and ensure it's pushed to another, different locations. I have Avast! installed to catch malware and track my phone if it's lost or stolen. I auto-upload the photos and videos I take. I have a PIN screen lock. Today I went the whole hog with full device encryption. Under the covers, Android is using the tried and tested Linux dmcrypt module, so this should be a slam-dunk.

The process was simple if rather lengthy. One hour later and after multiple device reboots, the ONE prompted me for the decryption PIN. That entered, I held my breath as the reboot continued. At last the lock screen appeared. Home and dry!


But no. The lock screen keyboard are somehow switched during the device encryption. I was greeted with:


Panic - there's no numbers! I checked out page 2 of the keyboard - still a noticeable lack of arabic numerals. What is "HI"? No, that makes things worse. What about the keyboard button down there on the left? Ah, it makes the keyboard disappear. Let's not do that again. What am I going to do? The obvious answer is a factory reset followed by several hours of reconfiguration. Bugger - tedious, repetitive but doable.

Ruling out a factory reset


Then the ONE started cheekily beeping: "Hello," it was saying, "I've got an SMS for you when you log in". "Bing bing! Here's another!" But how was I to read it?

While I was still digesting this, the damn thing woke up again: "Bing bing! You've got a third SMS! Your lucky day".

I rebooted twice - a soft and then hard reboot. On restart I was still presented with a keyboard without the keys I needed.

Now, a factory reset was out of the question. I would lose those SMSes and never be able to find out who was messaging me.


I called HTC Customer Service. Well,  I use the word "Service" in the broadest and possibly incorrect sense. Reboot was suggested, but discarded because I'd already trudged this path. Only after this did the agent appear to want to understand the situation at all. Then I had 5 minutes of classical music (to better soothe away the pain) while the agent sought help from his seniors. Or to Google, take a personal break or whatever it is they do in these circumstances.

Ah, human again! "Sir, change the keyboard to a different locale". I reminded the agent that that was why I was calling them. Last option: Factory reset.

I suggested that this was quite a serious issue with their new flagship device and that it might be an idea to capture more details from me to help their customers. However, the agent had an hourly call target to achieve and the greater good was somebody else's problem. All problems can be cracked with either a factory reset or a ONE-for-ONE replacement, finesse be damned!

Voice of the Customer

One does not simply factory reset. Not when I could not reply to my mystery SMS sender, anyway. So what to do?

The Android keyboard does not let you change locale from the lock screen. Basic security, and basically a good design.

I had ensured that the developer options were off. There was no hope in connecting with adb and hacking it.

I went from page to page in the keyboard, shifted, downshifted, press-and-holded every key I could - still no luck.

I called my phone from my landline to see if I could backdoor it while on the call. No luck.

Then I noticed it: The icon for a microphone buried on the second screen as a press-and-hold option. 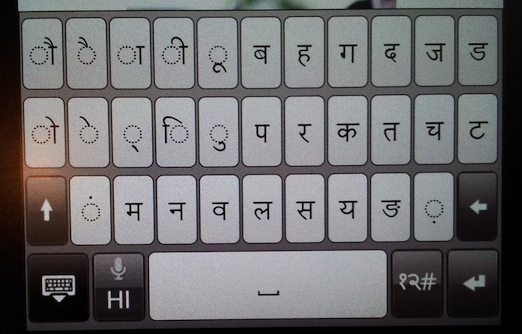 After selecting this, a big warning from Google appeared. I had to accept an option acknowledging my (presumed) non-English accent could confuse Google's voice recognition engine. Then the Google Voice input box appeared. I spoke my PIN. If there was a tremble in my voice, Google's algorithm bested it without breaking a sweat. I was in!

I am documenting this in case you, dear reader, have the same issue and Google lead you here. I guess that it's some weird combination of the following:


If you are going to encrypt the device, I suggest switching off the lockscreen security for the duration.

If you are stuck, don't expect much from HTC Customer Service. But find the Google Voice icon. Thanks, Google, for saving me.

And the "HI"? My Indian friends are laughing at me. This means Hindi.

This happens every time I reboot my ONE. Luckily the ONE is so stable I haven't realized until now.

Also, every reboot switches my Swift keyboard back to the HTC ONE's :(

I have another solution: I went into settings, selected 'Apps' and swiped into the 'ALL' tab. There I went down and disabled all the foreign keyboards so helpfully installed on the device. That includes Google Korean, Indic, Thai and Vietnamese. On reboot (I have to say I was extremely nervous. Back up your phone before doing this) I was presented with the default number pad for the screen lock. Victory!
at 03:07 No comments: