Don's evacuation to Gander on 911

A Personal Memoir by Donald Alcock

News of the attack filtered quietly into the cabin of our 777: "This is your Captain speaking. We're getting reports about some terrorist activity in New York and we have to divert our flight to Gander. I don't know much more about the nature of this activity but I'll keep you informed."

Before we got on the ship we had to wait hours in queues, and asked what you had in your bags, and they even read your private letters, and at last we got on the ship, then I went up some steps into a nice lounge where I read a comic while waited at the Purser’s office to get the number of our cabin. She called me and we went to tidy up when we tidied up we went on deck and watched our luggage upon a moving belt and we spotted our luggage, and then we thought it was time to get gone tea only we were too late and we couldn't get a meal until half past seven so then we to muck about until then. When we had dinner it was eight o’clock and time for me to go to bed. By this time the ship was moving down the Mersey to get front of the convoy as our ship was the Commodore’s. So we were in front just behind the naval cruisers and sloops. Well as soon as I got into bed Mummy came in and said “it's life boat drill would you like to come?” Well I said yes so I put on my life belt and went up to life boat station No.6 and there we stopped. The Captain came and told us to carry our life belts everywhere (but not wear them). He told us not to strike matches at night as it can be seen 3 miles away, and not to drop anything overboard as it gives the position of a ship; then I went to bed but I could not sleep and I could feel the throb of the ship's engines, and then Mum came in at eleven o’clock and she gave me glass of liver salts. I counted sheep and had a pillow down my side to keep cool; only had one sheet on. I went at last to sleep. (Here follows a drawing of Mummy in her her life belt) 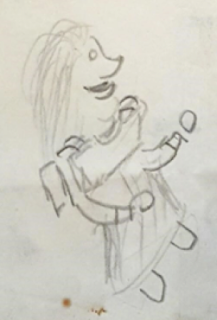 From Dora to Ponty by Donald Alcock

Preface to the Preface

Note from Andrew Alcock: This post was written by my father, Donald Geoffrey Alcock, in 1994 on the venerable XyWrite and Ventura Publisher - I have converted them to a newer format. Over to you, Dad!

The schools stood at opposite poles; Beacon Hill at one, St. Andrew's Preparatory at the other.
Beacon Hill School was founded by Bertrand and Dora Russell in 1929, so named because of its location near Beacon Hill on the Sussex coast. After her separation from Bertrand, Dora carried on the school alone. She moved it over the years from Sussex to Essex to Surrey to Somerset, and eventually to Cornwall. It was a school notorious among educators of the day for being left wing, co-educational, godless and progressive.
St. Andrew's Preparatory School was founded by Major A. G. Mullins (‘Ponty’ on account of his fine Punch-like nose) as a boarding school for small boys. He offered God, competition, manly sports, and nothing remotely progressive. This was at Grahamstown in South Africa.
I went to Dora at six years old and stayed until the war. Then I was sent to Ponty.
Sending a child of six to boarding school is unusual. Removing a child from Dora's regime to Ponty's would seem inexplicable. I relate only briefly the circumstances of my transfer from one to the other because this is not an autobiography; its purpose is to compare two opposed approaches to education and record the impact of one on an intermediate product of the other.
From Dora to Ponty.